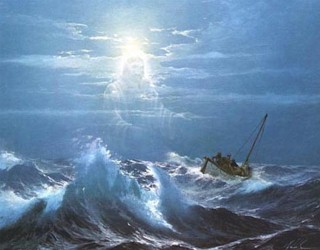 “Then Peter got down out of the boat, walked on the water and came toward Jesus. But when he saw the wind, he was afraid and, beginning to sink, cried out, “Lord, save me!” Immediately Jesus reached out His hand and caught him.”

The third and maybe most powerful lesson to be gleaned in the story of Peter walking to Jesus on the sea is found in verse thirty-one. Peter doubts and yells out, “Lord save me” and Jesus doesn’t even hesitate. His hand was already in motion, ready to grab Peter when he cried out. That’s who our Lord is! He didn’t allow Peter’s head to go under the waves, just to teach him a lesson. Sometimes that’s how we treat each other, but not the Lord. Jesus instructed Peter; letting him know he needs to grow in his faith and not doubt all the Lord can do in and through him, but AFTER He grabs him.

For every leader who’s ever made a mistake, feels like a failure, lost your faith, struggled in leading well, here is a powerful word for you! When you’re falling, sinking below the waves and can’t catch your breath; reach out your hand and call out to Jesus! He will grab you! Slow your pace, get away for a time if you must, but go to the Lord and surrender at His feet!

Just a few chapters later in Matthew we read that Peter again has a moment with Jesus where he acknowledges that Jesus is indeed the Messiah, the Son of God. “Jesus replied, Blessed are you, Simon son of Jonah, for this was not revealed to you by flesh and blood, but by my Father in heaven. And I tell you that you are Peter and on this rock I will build my church, and the gates of Hades will not overcome it. I will give you the keys of the kingdom of heaven; whatever you bind on earth will be bound in heaven, and whatever you loose on earth will be loosed in heaven.” (16:17-19).

Jesus calls Peter ‘a rock’ that He will build His church on. Peter, the guy who doubted and is going to deny Jesus three times out of fear. The same Peter, who four verses later, Jesus tells him, “Get behind me, Satan! You are a stumbling block to me; you do not have in mind the concerns of God, but merely human concerns.” (16:23) Did Jesus not know Peter well enough when He called Him ‘a rock’? No, He understood him completely as He does each of us. I believe the Lord knows our hearts and when we mess up He understands why. He gets us! Yes, He will instruct and discipline because He loves us and wants to carry out the plan He has for our lives. Yet, He’s not surprised by our failures and doubts, He expects them. Jesus already knows our faith will waiver, and He’s ready to respond when it does. Still, He does challenge us to keep growing and developing an understanding we can do ALL things through Him who gives us the ability!

Thus the title of my group; Water Walkers. Many pastors have become overwhelmed with the workload, made mistakes, and now wonder if they can do what they felt the Lord called them to. Some feel the Lord has abandoned them. They are hurting and struggling in their faith. Many doubt if they’re really qualified to be leading. If that’s you, be encouraged! Jesus followed through on building His church on ‘the rock’, Peter. A fisherman with emotional ups and downs, who doubted, denied and de-eared a man. He was spontaneous, emotional, and he loved the Lord with all his heart. Jesus knew Peter because He looked at His heart! He worked with and instructed Peter, but He never gave up on the call He had placed in His life. And He won’t with you either because He loves you more than you can comprehend!

Don’t try to lead alone! Leadership was never meant to be carried out in isolation; we need mentors, coaches, peers and most of all to learn to be completely dependent on the Lord! It’s not about our abilities, but all about His flowing though us!